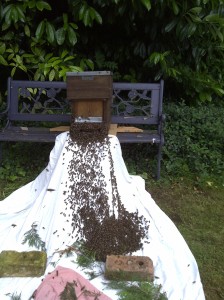 So, when they’ve found a clear spring day, and an open field, they burst out of the
gates: there’s a clash, the noise rises high in the air, they’re gathered together, mingled in one great ball, and fall headlong: hail from the sky’s no thicker, nor is the rain of
acorns from a shaken oak-tree.

taken from http://www.poetryintranslation.com/PITBR/Latin/VirgilGeorgicsIV.htm#_Toc534524376 , translated by A.S. Kline
And, of course, not the stuff of horror movies, as amateur and experienced beekeepers would know.  As they also would know the photo above is not of the bees ‘in swarm’, but after having been captured and in the process of being re-homed.  However, between the two is a some work and uncertainty, especially if this is the first time capturing a swarm.

After our aborted attempt at inspecting the hive a few weeks back, we went back about 3-4 days later for a more thorough look.  The brood box was full with brood, stores, many more bees than last year, and at least three capped queen cells and a few queen cups.  On advice from one of the local association’s bee men by phone, we went back on the same day and got rid of the queen cells hanging from the bottom of the frame, but left one in the middle.  This is because we thought it might be a case of supersedure, given the age of the queen, and not swarming.  The bees had also started to draw out the frames in the super and filling them up with honey.

We thought these were all good signs, but just in case we went to the association apiary to get a nuc.  I guess we had some idea that we might either use it to force a swarm or actually hive a swarm, if it came to that.  My telephone bee guy (who had given me the bees in the first place) thought this would be a good move.  However, when we got to the apiary, some of the association people were of a totally different mind set (hazard of the trade, it seems.  Everyone has a different approach).  However, we persistedand brought the nuc home.  And waited.

And then, yesterday, right at the point when our new neighbours with whom we share just a tiny bit of border hedge decided on some marathon gardening on that side of their property:

SWARM! On a fir tree in the hedge border.  It looked to be a prime cast judging by size.  But their timing was terrible.  We stood before it and thought, well, we could just let them go on their way in a few hours, after all we’d never done anything like this before.  But this would mean waiting and watching as our neighbours got closer to that part of the hedge on their side with all their electronic gadgetry.  Now that did have the makings of a horror show.

So, I got out all my bee books and watched a few Youtube videos; my husband climbed our little kitchen steps onto an upturned water butt, and sawed away at the bulging branches which were then dropped into a large cardboard box.  (I wouldn’t recommend the upturned water butt approach, health and safety and all that.  But we only had a long house ladder and those kitchen steps and nothing in between, and those neighbours were getting closer…).

We left the box half covered with a sheet.  We were pretty sure the queen was already in the box, and miraculously we were right because we had a whole row of bees on the edge of the box, bums in the air, fanning their wings to beat the band calling everyone into their temporary home (wished I had a photo of that and the swarm, but we were so worried something would go wrong we had no time for Kodak moments).  We couldn’t believe how successful we were, how docile the bees were (drunk on three days worth of honey presumably), and how as if on cue they all headed for the box.

Of course, we realised they couldn’t stay in the box forever, and we couldn’t rest on our laurels.  So, back to the books, my notes from association sessions, and yes YouTube.  The proof of the result, as you can see, is in the photos.  Once we set everything up, and got the bees onto the sheet, of course, at first it didn’t seem like this was going to work.  The bees were heading in every direction.  But after a few nudges with the feather brush, again, it was almost as if someone had given a signal, and they all headed in the same direction.  It was really something to see.  So, successfully re-homed in the nuc (as of Sat eve) and given a sugar syrup feeding.

We were feeling quite smug, of course, and now are thinking of becoming Swarm Catchers for Hire.

We then went through the main hive which had definitely decreased in size.  Some concerns and observations are listed here:

1. Saw one sealed queen cell and three queen cups which did not look to have anything in them though hard to tell. I mistakenly got rid of queen cell thinking that one of the cups was another queen cell (books say we should leave at least one after a swarm).  Bees were not happy at all about our messing about with queen cells (although some had recommended destroying cells, I have one book that said this is a very bad approach and the bees will get a bit annoyed at it).

So, my concern is that if the queen is on her way out (there are signs), we may have eliminated the hive’s chance to requeen.  In that case I am hoping that the workers will turn one of the cups into a cell. (Of course, they may use the products of tHese cells to send out casts, weakening this hive even further).

2. Of major concern is the low level of brood in any form

3. I also feel like I saw more drones than I ever saw, although there didn’t seem to be an awful lot of drone cells previously.

4. Honey production in the super on-going.  The odd thing is that there didn’t seem to be any discernible reduction in stores/honey in the hive.  From what I have read, a swarm takes away a considerable amount. I suppose there is an outside chance this swarm came from someplace else. There have been notices of swarms and who to call in the village newspaper. But this seems unlikely in our case…

5. Also concerned about swarm swarming again.  I had thought to give this swarm to a beginner beekeeper, but as I am concerned about the sustainability of the main hive, I am afraid of being left with no bees at all!  I also think the nuc group might be a bit more energetic honey-wise.

Get a new queen for main hive?

(sorry, notes a bit rushed here at the end)