As you can see from the caption, not my swarm.  But, I so liked the ingenious-ness (sp? word?) of the approach that I had to take time out from my own swarm issues so that you can enjoy it as well.  This swarm comes courtesy of one of our bee guides who also happens to be an expert swarm catcher.  Here’s the story, according to Colin:

Took a look at them tonight.  A few had moved up onto a frame or two and had started to draw comb but 99% were still on the comb they’d built round the pyracantha trimmings in the bin.  I moved the brood box to one side and removed as much comb as possible by snipping the twigs with secateurs.   I then used a crown board as a temporary floor, replaced the brood box and shook as many bees as possible onto the frames before putting a crown board on top.  There were still some bees on odd pieces of comb but I only had to hold them over the holes in the board and they walked straight into the box.

When I left there were still a lot of bees down among the twigs but I’m hoping they’ll find the brood box more attractive and will move up to join the others.  I don’t know if I managed to get the queen into the box. Time will tell!   They roared a lot in response to all the disturbance but weren’t in the least bit aggressive.

This was the state of play“as of 9 June, all looking quite hopeful.  But bees won’t be told.  I received this follow-up from Colin one day later:  Went to look at the wheelie bin bees this afternoon and found no sign of them.  Ah well, you win some, you lose some.

The equanimity of the experienced beekeeper.  I don’t think I would have been so charitable to the ungrateful madams.

This is the state of detente at the moment, the hive and the nuc at opposite ends of the garden (that plank of wood on the front of the hive is covering up woodpecker damage): 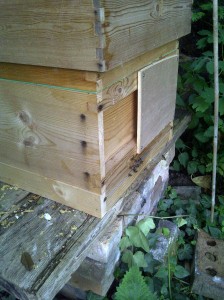 You may remember from the last photo that we had placed the nuc on a garden bench when we were hiving the swarm.  We then moved the nuc a bit of a distance, maybe 12 feet, to its current location.  For a few days after, those bees were circulating the bench, looking a bit confused.  But they seemed to settle in fairly quickly.  We gave them a sugar feed.  They were soon bringing pollen into the nuc, as were the bees left in the hive.

Here are some other observations and advice, mostly from my bee guides:

1.  Virgin v. Crone  It was ever thus, but then that’s another blog entry.  For our purposes here, I was under the impression that a virgin queen leaves with the prime cast, and the old queen stays behind.  However, one of my bees guides says that the old queen goes with the prime cast.  It is an unusual occurence if the queen is failing, but not impossible.  So, instead of preparing to supersede as we thought, the hive were preparing to swarm.

2.  Is she, or isn’t she?  You might remember that we were concerned about taking out what we thought was the only queen cell in the hive after the swarm (on the assumption that it was the new queen that left, leaving the failing queen).  What I didn’t say was that later on, when looking through the bucket we throw old comb (and where we had put the queen cell) we saw a queenly looking bee wandering among the detritus.  We checked the queen cell we had thrown away, and sure enough, it had been opened at the bottom, and there was no bee inside.  So, my husband escorted her back to the hive.  As the bees from the hive have also been gathering pollen, I can only guess someone has been busy in there.

3.  Drones everywhere?  Which is a bit of a relief, because I thought I might be left with a queenless hive.  Time for some bee guy/guide advice again:

Keep your fingers crossed that you still have a virgin queen in the old hive.  Whether you have or haven’t there will be a lapse in brood production and you will have to wait about three weeks (in my experience) to see whether you have a queen.  If there’s no queen you needn’t worry about further casts – there won’t be any!  If there’s no queen and the you don’t replace her fairly quickly the danger is that some of the workers will start laying.  Their eggs will turn into drones.  This is bad news as the colony will then reject any new queen you try to introduce.  Well, after this I was imagining I was seeing drones everywhere!  In the face of my paranoia, I got this reply:  Pollen’s a very good indication that they are feeding grubs.  I don’t think the number of drones is significant.

4.  Should I stay or should I go now?  Of course, now that I was reasonably sure there was some kind of egg-laying machine in the hive, my next wave of paranoia had to do with future casts.  I had read some books that said you could see wave upon wave, and only left with a few stragglers; others said that there would still be a workable colony left:  Bee guys/guides say:   1. With the main hive if there was only one queen cell in there and little brood they have no means of producing casts (or a new queen).  If the queen from the only QC was close to emerging then she was probably in the bucket and you did the right thing to run her back into the main colony.  2.  I think they’re unlikely to send out casts but if they do it means they are producing queens so no worries.  However many casts they produce you’ll still have a viable colony in the old hive to take you into the winter. As it’s been more than ten days without any excitement since the first swarm, I am hoping they are settled in.

We will be examining both this weekend to get a better idea of what’s going on.  AND, we will be rehoming our swarm in a brand new, hand-made hive!  Pictures and details in one of the next posts.

I will leave you with some words of wisdom, this time not from Virgil, but from one of the bee guy/guides:

Judging what is happening is difficult, but at the end of the day you have learnt a lot and it’s the bees that are teaching you.  Believe me they will keep on teaching you!

« Georgics Book IV: SWARM!
What will all those drones get up to? or Disappearing Women 3 »