It’s Official: They Are Engaged! 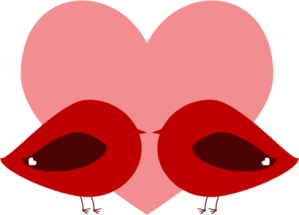 auspex
1. An augur of ancient Rome, especially one who interpreted omens derived from the observation of birds. 2. In ancient Rome, a religious official who interpreted omens to guide public policy
auspicate, auspicating
1. To begin or to inaugurate with a ceremony intended to bring good luck. 2. To give a favorable turn to in commencing something; to inaugurate; a sense derived from the Roman practice of taking the auspicium, or inspection of birds, before undertaking any important business or function; such as, “They auspicate all their public proceedings.”
auspices
1. Protection or support; patronage. 2. A sign indicative of future prospects; a favorable sign or propitious circumstance; an omen: “The auspices for the new venture appeared to be favorable.”   3. Observation of and divination from the actions of birds. 4. Divination or prognostication, originally from observing the behavior of birds. 5. Etymology: from Latin auspicium, “divination by observing the flight of birds”; from auspex, auspicis, literally, “bird seer”; from avis, “bird”, and the stem of specere, spicere, “to see, to look at, to watch”.      (from  http://wordinfo.info/unit/258/ip:16)

Aves
And just in time for Valentine’s Day, appropriately enough.  And no, not the bees (more of which anon), but the birds, the other focus of my observations from my conservatory office.  My colleagues, as I have referred to them in previous posts.  Most specifically, the robin (s) who have claimed our back yard as turf.  You may remember in the summer my posts about the warring robins, Scrap and Fuzz.  One at least has hung around during the winter:  my suspician is that it is Fuzz as it was the original baby robin and the aggressor in the Scrap/Fuzz conflict.  Over these past months, it would seem that other robins have tried to enter the territory, and have been resolutely chased off.  But after Christmas, I noticed a rather startling event:  two robins not only standing relatively close to each other, but feeding together after a fashion.  This seemed so unlikely that I was forced to do a bit of research and came across this:

Robins, both males and females, hold their own separate feeding territories in the winter,  which they defend vigorously. By around Christmas, many will have paired up.  Initially, they do not spend much time together, merely tolerate one another,  but will remain together until the following autumn moult. (from http://www.garden-birds.co.uk/birds/robin.htm)  (an aside here:  I often find this site more informative than the RSPB site, especially as it usually includes personal observances at the end of each entry).

Well, this exactly describes how these two birds treat each other, so I can only think that there will be a wedding and the sounds of nagging, hungry little voices in due course.  My questions are:  Who stayed Scrap or Fuzz?  And was it a male or female?  Garden-Birds  gives the impression that it could have been either male or female, although I have read in other sources that the females are more likely to wander off for the winter and the male birds stay put. 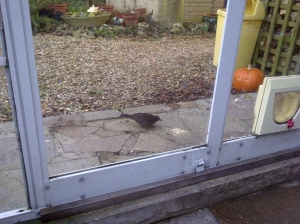 We have had more blackbirds in the yard in winter 2012 than in summer 2011.  I hope that means they will be sticking around for a bit.  This gal just yesterday plucked a nice big fat worm from the cold ground beneath the gravel.  Thought she might have some difficulty eating it, but not one bit.  She pecked at it a few time and then swallowed it whole, like some magic trick.  Just today, she was practically tunnelling under that pumpkin for grub. (excuse the crap photo, but I was thinking at least I have no fear that people will try to steal my photos.  After all, who wants to put crap photos on their blogs, er, besides me that is?  Also, excuse the unkempt garden…Nope, I think that’s all I have to apologise for at the moment.)

It’s gotten a lot colder this week, really feeling like winter now.  It’s around this time of year that I get a bit worried about bees and stores.  Although both hives have appeared quite healthy over the warm spells, flying about, even gathering a little pollen, any protracted period of cold weather is concerning, especially for the smaller hive.  So, we gave each hive a little fondant treat on Sunday, after a tutorial from the folks at GardenFork TV  (I love the dog barking in the background, and the very American expressions of “going to the bathroom” and “going to the restroom” used in conjunction with bees on a poop run).  http://www.gardenfork.tv/late-winter-check-and-feeding-of-the-honey-bees

While the swarm hive bees were all towards the bottom of the hive keeping warm, when we opened the main hive, there was a fairly signifcant cluster above the frames.  I was a little concerned about this, so went in search of some answers.  The Honey Bee Suite (http://www.honeybeesuite.com/why-are-all-my-bees-at-the-top-of-the-hive/) confirmed what I had thought, that they might be in search of food.  In retrospect, this makes sense as they seemed to go for the fondant as soon as we put it down.

Regina Apis
Getting back to the birds, for a moment, my gal pal has been hanging around my conservatory office for most of the afternoon, picking at some of the seed I have put down, looking for her own food, or sitting in the rock pool in what appeared to be discomfort (I suppose you would be uncomfortable if your tukhus was in water that was in the process of freezing over).  And the engaged pair has put in appearances, together and separately.  They put me in mind of one of the best books I have read recently, The Secret Life of Birds by Colin Tudge (Penguin 2008) (See his website here http://www.colintudge.com/).  He is quite refreshingly honest about why birds, especially robins, become attached to humans:

European Robins, stroppy though they are with their own kind, often seem uncommonly attached to gardeners, perched cutely on the wheelbarrow’s edge, waiting for the worms, while the gardener toils…But why are robins so attached to us?  Because they think we are pigs.  In the wild, robins are woodland birds and follow wild boars as they dig with their snouts for roots and truffles. (p220)

For that passage alone the book is worth reading.  But I have another reason, the subject of which will not be a new one for the 10 dear readers I have. It is not only gardeners who get above themselves with their wildlife hangers-on that Tudge takes aim at:  sexism in science does not escape his attention.  Now hear me out, or rather listen to my new best friend, Colin:

But in Wattled Jacanas, the protectors are the females, and the smaller, long-suffering toilers in the middle are the males.  Furthermore, whereas the eggs and chicks that each male takes care of all belongs to the boss female, DNA tests reveal that they do not all belong to himself.  Male Wattled Jacanas often find themselves taking care of other males’ children.

The family arrangements of the Wattled Jacanas were first described formally in the Proceedings of the Royal Society of London in 1998 and one of the scientists later commented: ‘It’s about as bad as it can be for these guys.’  Overall, as Joan Roughgarden points out in Evolution’s Rainbow, ‘The investigators, themselves male, were outraged.’  But she takes a feminist view and, she says, had the arrangement been the other way around – a protective male with a harem of compliant females – this ‘probably wouldn’t have provoked such outrage.’

Tudge goes on to observe that in the bird world this is not an arrangement out of the ordinary, and the male/female roles are by no means standardised across birds.  The problem arises when we look at birds, animals etc “through conventional human eyes.”  I have to say that not only is Colin my new best friend, but so is Joan (here’s a description of her work at Stanford http://www.stanford.edu/group/roughlab/; and her biography has its share of revelations http://en.wikipedia.org/wiki/Joan_Roughgarden).  What I like about my buddy Colin is that I cannot detect a sneer in that clause But she takes a feminist view.  Throughout the book he makes a point of the danger of viewing birds ‘through conventional human eyes.’

It is precisely because she cannot rid herself of convention that I had to give up on The Hive by Bee Wilson (John Murray 2004).  I find it particularly infuriating when women persist with the he-generic:  there are a number of strategies which allow you to avoid the blot on the page of he/she etc.  And if all else fails, if you are a woman, why not use ‘she’?  Men can use ‘he’, women can use ‘she’.  Are we all such knuckleheads that this would actually cause confusion?

Wow–headrush from having to climb down from that soapbox! You know who I blame?  The bees.  They are a bad influence. As well as those dunnocks, wattled jacanas….

« Swarming Bees? Bring it!
And Suddenly Descends the Spectre of Death* »

One thought on “It’s Official: They Are Engaged!”