And Suddenly Descends the Spectre of Death* 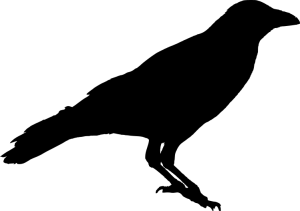 They appeared, or should I say descended, all at once.  The three of them settling into one tree.  One would think from the look of them that the few crusts of bread they were so obviously examining would have been beneath the notice of such gloriously evil-looking beasts, all glossy black feathers, cold gimlet eyes, and of a size that far surpassed any flying thing in the garden.

The Harbingers of Cold, Ice, and Dead Bees

They made their appearance a few weeks ago before the first, paralyzing snowfall of the season here (3 inches, yeah, they are lightweights here in the UK when it comes to snow) and below zero celsius temperatures (-13, to be exact.  See previous lightweight comment).  I should have known there and then that some evil would befall, and low and behold it did:  the pipes in our outhouse (outdoor loo to use the local terminology) sprung a geiser-like leak.  More worrying was the pile of dead bodies building up outside the swarm hive (the weaker of the two hives ) on the same day, the first warm day after the snow and cold, 13 Feb.

We had been so optimistic about the bees towards the end of January.  We had applied the oxcylic acid, witnessed poo flights, and even some pollen-gathering.  All hopeful signs.  Then came the cold snap and the snow.  OK, I saw a few dead bodies outside the hives in the snow, but all my bee sources, including a new beekeeping acquaintance from the village, said as long as you don’t see a pile…(warning:  those sensitive to cack photos, and especially cack photos of dead bodies should start scrolling now).

All this and the outhouse springs a leak too!

February 13 seemed to be the day a lot of things snapped:  the pipe in our outhouse and the bees in the swarm hive.  Now, I knew that winter bees usually had a mass drink of the old Kool-Aid around this time of year.  They are longer lived than spring/summer bees and they have to make way for the young’uns.  But that statement, “don’t worry unless you see a pile of them,” haunted me (those carrion crows…) when I saw the pile-up.  Add to that the sight of them flying from the hive just to expire, most of the time right on top of the pile, one spread-eagle across the bars on the mouseguard.  Even the main hive had a few casualties where they would fly out in hope only to plop down into the snow and expire on the spot.

So I looked through all my books and constructed various google searches around the phrase, “pile of dead bees.”  Only, of course, to get conflicting answers.  Sometimes, when it is too cold to clean house, the corpses pile up. Once it warms up a bit, they are promptly ejected.  Usually, this is a more protracted process and hardly noticeable to the beekeeper, but if a number of them have built up, then they get thrown out all at once.

So, there was nothing for it but to watch and wait.

They Are Just Too Mean To Die
And we didn’t have to wait long.  Within a day, all systems were go at both hives:  flying about on poo and pollen (dark orange and ivory-the last probably from all the snow drops we have in the garden, but orange?) excursions.  The swarm hive even started to clear the pile, well, basically grappling with the bodies and plopping to the ground where they would leave them for the birds.  The madams have been quite a presence in the yard, in fact nagging little presences hovering around the conservatory.  I’ve made sure that their favorite watering holes were filled.  We might get some more fondant into the hives this weekend, as it’s supposed to turn cold again although not as cold as last weekend.

Harbingers or Just a Bad Rep?
Since January, there’s been a lot of birdlife in the yard:  chaffinches, robins, magpies, blackbirds, wrens, twits, wood pigeons.  Before the snow fall, our crabapple tree out front was still relatively full of fruit which I thought was strange as the birds should have had them by that time. And they did have them big time on the first day of snow:  they picked the tree clean within the space of a day, mostly blackbirds performing all kinds of acrobatics to get at the fruit.

Of course, all of the birds (including my gal pal who has been a pretty constant presence up until a few days ago) pale into comparison with the harbingers of death.  My new beekeeping friend from the village trashed the crows’ near cousins, the magpie, with what I consider to be an urban myth:  that they are responsible for the disappearance of the songbirds  (for some alternative perspectives on this, see http://www.bbc.co.uk/blogs/natureuk/2011/06/springwatch-investigates-the-c.shtml; http://www.birdcare.com/birdon/birdcare/tipsheets/magpies.html). Well, the magpies have been a bit less visible around here since I have seen more crows.  This is not necessarily a coincide as according to one of my favorite sites, Garden Birds, young magpies often make tasty treats for crows. (see http://www.garden-birds.co.uk/birds/magpie.htm)

And you’ve got to love the bird a little after watching this video:  http://www.youtube.com/watch?v=WMxZEFp-H2g&feature=related.  I hadn’t realised they were mimics.  I find I admire the intelligence of these birds, magpies, crows, ravens, as fearsome as they are (in fact, the same three have just swooped into the garden for some bread.  And, I haven’t seen my gal pal all day for the first time in a month.  Coincidence?)

For some raven love:  http://www.youtube.com/watch?v=pbQ4iL7_oT4

And the brid that started the blog post, the crow:  http://www.youtube.com/watch?v=BGPGknpq3e0

*Using British/French spelling here as it makes it seem more…spectre-like.

Crows, again, have another kind of food. Nuts being too hard for their beak to break, the crow flies to a great height, and then lets them fall again and again upon the stones or tiles beneath, until at last the shell is cracked, after which the bird is able to open them. This is a bird with a very ill-omened garrulity, though it has been highly praised by some.1 It is observed, that from the rising of the constellation Arcturus until the arrival of the swallow, it is but rarely to be seen about the sacred groves and temples of Minerva; in some places, indeed, not at all, Athens for instance.2 In addition to these facts, it is the only one that continues to feed its young for some time after they have begun to fly. The crow is most inauspicious at the time of incubation, or, in other words, just after the summer solstice.

Natural History. Pliny the Elder. Book X, Chapter XIV-Crows. Birds of Ill Omen. At What Seasons They Are Not Inauspicious.  http://www.perseus.tufts.edu/hopper/text?doc=Perseus%3Atext%3A1999.02.0137%3Abook%3D10%3Achapter%3D14

« It’s Official: They Are Engaged!
There’s an Air of Expectancy Around Here or Will They or Won’t They? (1) »

2 thoughts on “And Suddenly Descends the Spectre of Death*”