Life in the Main Hive: You would never know this was a hive we had left for dead at the beginning of June

A week or so after the last varroa treatment we went back into the hive for a winter health check. We, like quite a few beekeepers, were not overwhelmed by the mite drops. But as Emma at Miss Apis Mellifers  commented on on the previous post but one, this could be down to the swarming, that these are very young colonies playing catch up. Whatever the explanation, I’ll take it as a good sign.

Life in the Main Hive: Ah bless! The poor unsuspecting things. Enjoying the quiet before we start shaking them all about

We started with Hive one or what we call the Main Hive.  This hive now has a brand new queen, just months old (since June).  This is the third queen for this hive in as many seasons.  Despite her relative youth, she seems not to be having a problem mating and laying.  The population size of the hive has come on leaps and bounds since June.  I would hazard a guess that it’s at least at 20,000 if not more.  There are anywhere from 3-4 frames of brood, the winter babies I am assuming.

There was one thing we saw in this brood box which we have only seen in the second hive:  the outer frames on either side are relatively empty of stores.  Now I don’t  think this unusual given how behind these bees are with the swarming, and the fact that they had virtually no stores in June.  However, we will have to keep an eye on this.  For now, we moved both frames in to encourage them to fill them up.

Another thing that makes us not overly concerned about the state of their stores is the condition of the honey supers.  Between the two supers, there is about 1/2 to 3/4 of a super of honey.  This is the most I’ve had in three years.  But we didn’t take the frames away.  I left them there for now to see if they might use them to make up for their lack of stores in the brood box.

I know we cannot leave them in there for two long as they will crystallize.  But, truth to tell, we wouldn’t know what to do with them!  There’s not that much to justify renting the equipment for from the association.  We might take some in the form of comb honey.  But we are happy enough to see what they make of the extra honey, and then move the frames later.

For most of October, they still have been taking in quite a bit of pollen, although the last few days this has fallen off a bit because of the cold.

If possible, things were going better at the Second Hive, or the Swarm Hive as we still call it.  It was the final home of the first swarm last year from the Main Hive headed by our original queen.  It looked as if it was going to struggle, maybe not even make it through last winter.  But, it proved us and everybody wrong.  It was the more annoying hive of the two this spring, with its continuous swarming/unswarming.  It also looked on its last legs in June.  But, it has come back even stronger than the Main Hive.  It has a brand new queen now, the second one for this hive, and she is going great guns.

There was about 41/2 frames of brood and the brood box was packed with stores (this was the hive that refused to draw out its outer frames last year, never mind fill them). 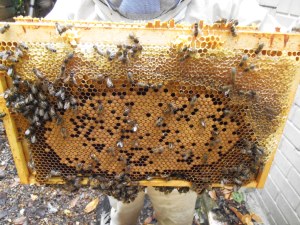 They never ventured up into the super, but I am not surprised at that. I am curious to see how they do with the super next season, though.  As with the Main Hive, they are still bringing in loads of pollen.  In fact, I looked at them today, and despite the cold snap, they were still bringing it in.

It’s probably ivy.  We have a big clump of it at the end of the driveway, a favorite spot for the swarms to settle before wafting off across the field to their final homes.  In fact, a few weeks ago, I was in the driveway and heard that sound I learned to dread in the spring:  the loud hum of the swarm.  Except it wasn’t.  Just the little madams greedily sucking up the ivy food.

This might be controversial but I have not fed either hive yet.  I hope to get a dry, relatively warmish patch sometime soon to look at them again, and make a decision about feeding them.  Of course, my local beekeeping group swear they don’t winter feed their bees.  I probably will give them a little fondant as a Christmas treat.  We’ll see.

A few weeks ago a woodpecker started showing up at the bottom of the garden, flying from tree to tree, sometimes settling in the trees quite close to the Main Hive.  I told the husband that we were going to have to give the hive the ‘attica’ treatment, so we dragged out the chicken mesh we used last year with which we surrounded the hive.  Worked last year.

Apparently, though, the woodpecker has cottoned onto our attempts at deterring it for just a couple of days ago I caught it on the roof of the hive eyeing up the metal covering.  Although I was a bit curious whether it would actually be able to make its way through the metal covering, concern for the bees won out so I chased it away.  Now, the hive has a chicken wire covering.

Attica! (exceot we are trying to pevent break-ins instead of break outs)

(By the way, top three photos taken with our new digital camera, last with phone.  Can you spot the difference?)

Now, I’ve got to find enough chicken wire for the second hive just in case it turns its attention that way.  I haven’t seen one in the vicinity of the garage, but you never know…

Translation
In winter insects go into retirement for whence could they obtain strength to
endure frost and snow and the blasts of the north wind?—all species alike, no doubt, but not for so long
a period the ones that hide in our house-walls .and are warmed earlier than
others are. In regard to bees, either seasons or else climates have changed, or
previous writers have been mistaken. They go into retirement after the setting
of the Pleiades and remain in hiding till after their rise so not till the
beginning of spring, as writers have said—and nobody in Italy thinks about hives before the
bean is in flower.

6 thoughts on “Wintering Down”