Winter Has been Rough, But the Girls are Hanging In There 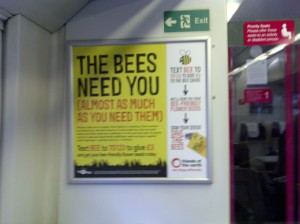 Bees on the London train

This post will show how way behind I am in posts!  This time of year it seems that if you are away from home even for one day things change. New blooms, new seedlings,  new chicks, and multiple new weeds.

Anyway, we opened up the hives about a month ago during a particularly warm spell.  I was especially anxious to do so because, although one hive was quite active on warm days, the other one was distinctly quiet.  The way the cold hung on a bit longer this year, there has been a lot of talk about starvation, so I was a bit worried.  In fact, we had been planning to do our second inspection, but currently we are having a bit of a cold snap.  Now I am concerned not only about the bees, but some of the little chicklets that are being fed by harried parents at the moment.

Hive One [new queen a year old in June]:  Population much smaller than it was at this time last year.  I would say 15000-20000. No capped brood and couldn’t tell if there was any larvae although we had seen them bring pollen in on warm days.  A few frames with black, empty cells so we switched out for new frames. 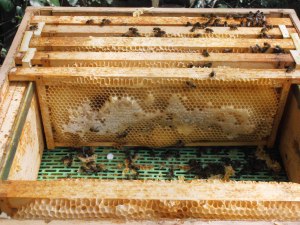 Weeks following:  loads of activity, loads of pollen and water collection.  These girls have been really ramping up the activity.

Hive Two: [new queen, a year old in June] suspect starvation, a lot of dead bees at bottom, bee population of maybe 5000-10000.  Mold starting to grow on some frames.  There is no capped brood, difficult to tell if there is any larvae.  The frames seem empty except for uncapped solidified stores.   This hive up until now has not been as active on warm days as the other hive.

Cleared the floor of dead bees, detritus.  Took out moldy and/or black empty frames and swapped in new frames.  We did leave pieces of frames with stores in it.  We also piled on the sugar syrup and fondant.  We wanted to give them every chance.

In weeks following:  a lot more activity, and a lot of pollen collecting.  Although the activity is still less than that of other hive, it’s to be expected.  What is important is that the activity is steady and constant. Of course, now that the weather has turned cold, I am back to worrying about them.  They are still not as strong as they could be.

Not a pretty sight but they are on the mend

They have moved their watering hole from the empty plant pot to the three small bird baths (‘baths’ is a fancy word, more like old plant saucers).  In fact, it’s more like ‘commandeered’ than’ moved.  The birds have to nudge them aside to get a drink!

And they certainly are not neglected on the pollen front, as is demonstrated by the garden in its purple phase, below. 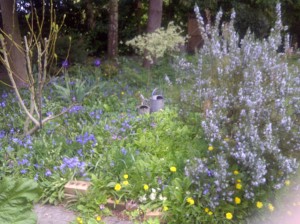 « “Soviet Beekeeper Buys Plane for Stalingrad”
Did I Just See What I Think I Saw? »

8 thoughts on “Winter Has been Rough, But the Girls are Hanging In There”