It wasn’t all bad news from the bees’ perspective on that Saturday. The first swarm, which had been lucky enough to transfer to a nice, comfy nuc a few weeks back, was transferred to even more spacious accommodation – a brood box.

Before that could happen (and while the other bees were deciding on a swarm location), we had to check on the little madams’ progress in the nuc. Would they have adopted a more leisurely pace what with all the comb, stores, and laying work they had to do? Or would they be the same speed demons they were in the original hive, covering every inch of comb as fast as can be?

We were about to find out….. 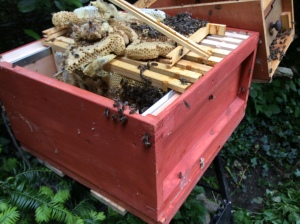 The short answer is that they had chosen the speed demon option and had filled up all but one frame by the time we had got to them.

Ok, this looks kind of bad. But there is an explanation. Which is that we put too many frames into the nuc, things got a bit crowded, and one of the frames came apart when we were trying to transfer it to the brood box. Lesson learned: we can’t crowd these madams because they need lots of room. We took the frame apart and left the comb at the bottom of the hive for them to fill out.

But it wasn’t all bad news….

We are so proud

I was honestly impressed with the brood pattern on the frames. Not only was there a lot, but it was pristine, systematic, right down to the avoidance of the wires.

Ah, home at last (just don’t get too comfortable)

And that was the transfer. Pretty much problem free. We had bought the brood box etc from a local beekeeper who makes them, frames and all. So, not a lot of effort on our part which is the way we like it.

You will note that there is no super. My current philosophy is that if I don’t add a super, I DON’T HAVE A THIRD HIVE. And you can keep those opinions to yourself.

We should have stopped there….

Buoyed by our success with the transfer, we decided to look at the original swarm hive (from which this one erupted as well as the one which had made an escape on that same day-although we are still not 100% sure about this).

Mistake. First of all, not really a good idea to examine a hive right after it has swarmed. They are already in a state of agitation. Why make it worse? I knew this. But what with weather predictions, the good behavior of the nuc bees, we had our suits on…. yaddayaddayadda. We opened up the hive.

Agitated wasn’t the word for what they were. And to add insult to injury, we took away their mega construction, the one they had been working on for a month or so.  See here for this amazing piece of architecture.

Granted, this work of art was not as filled with honey as it previously had been, but there was still some there. It had to go, though, and we really thought we were deserving of a first try of this honey after all these years of hard graft on their behalf.

Well, of course, now they were apoplectic. We shut them up, but had to stand around in the yard for hours until they would calm down and leave us alone. My husband’s leather gloves are now covered in little ding marks where they tried to insert their little stingers.

But we got the honey! And, I didn’t have to go to the hospital or the nearest mortuary slab. Why, you say? Because after things had calmed down and we were able to de-suit, I found that my hood had not been zipped up! I mean, they must have been so pissed off as to be unbalanced and not up to their usual proficiency of being able to find the least little opening…. 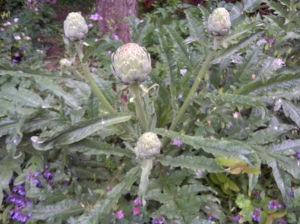