But when both leaders from the battlefield are recalled,
do to death him who seems inferior, that he be not a waste and bane;
let the better reign in a clear court.

Not a romantic quote true, but you will see how it applies a bit later in the post….

Is this some kind of message?

This is part of a cobweb on our clothesline. Notice anything unusual about it? See the little heart woven into the web? I wonder how it got there?

The heart is made of little bits of newspaper, and there is only one source of that in the garden at the moment.  So the bees, all blissed out by the togetherness in the combined hive (yah, right!) expanded this circle of love to helping the resident spiders out with a little cobweb makeover.  What I want to know is how did it actually get there? The clothesline is a favorite resting place of all manner of flying beast, including the bees. Did they perhaps sprinkle a little newspaper onto the cobweb?

As mentioned in a previous post, we decided to combine our two weakest hives–one a well-established hive struggling to grow and the other a swarm that never expanded beyond nuc size. One approach is the newspaper trick. Place one brood box atop another after removing the queen excluder from the bottom box, replacing it with a couple of sheets of newspaper. A few slits are placed in these to give them a bit of a head start. The theory is that the two colonies of bees need time to get used to each other, each other’s scents. By the time they have chewed through the newspaper (littering your garden with it or creating little works of art), they know each other a bit better and are able to get to work.

We completed this task last Thursday (21 Aug) and really had no idea what to expect. It was a little like waiting for someone having an operation. You just have no idea what’s happening beyond the swinging doors of the operating room. All you can do is wait.

What made it a bit more fraught was the fact that we could not find the respective queens. It is best to dispatch with the weakest or oldest queen yourself, and let the remaining queen take over, if she is able. I suppose if we were more tender-hearted, we would not have gone through with the combining. But it was a case of sacrificing one life to save the many lives of either hive. Still, you couldn’t help but wonder at the carnage inside.

But, the heart was a good sign. As was this

A bit of housekeeping…

Little flecks of newspaper outside the hive. In addition, there had been a lot of pollen deliveries.

So as it turned warm last week, we decided we apply the first course of Apiguard (thyme-based anti-varroa gel, most effective at warmer temps) as well as see how they got on (Aug 27). 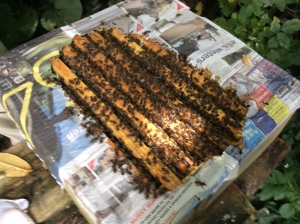 No wonder they were getting creative with the newspaper! They had quite a bit to get rid of.

So, we quickly set the Apiguard on top of the frames, which we had decanted onto a piece of card (more chewing). Quickly because we did not use the smoker. But with all the stress they had been put through, they were relatively calm. 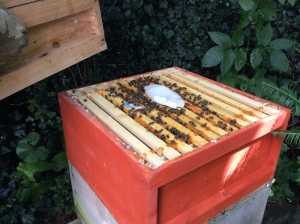 They just got over getting new roommates, now we hit them with the stink!

It can only really fit on the top broodbox at this point, but we are reasonably confident from the number of bees in the honey super that there is sufficient traveling up and down.

However, the garage bees, the source of all the swarming, the turbo-charged bees, were not going to take the stink quietly. So we were even quicker with them… 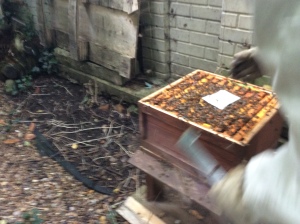 In fact, when I tried to place the cover on the iPad, I heard a little buzzy squeal of annoyance: I had trapped one! These girls would never be shaping little newspaper love hearts for us.

Incidentally, I was told on the British Beekeeping Forum that a possible reason for them attacking Ipads and smartphone is the blackness of the screens–in that they resemble cows and cows mean destruction. I am really not sure I buy this. I think it might have more to do with electrical vibes.

Some pretty things to look at…

Japanese Anenomes: This patch has never been up to much in the past years, but all of a sudden have gone crazy, even crazier since this photo was taken

Plums: never knew we had these until birds started plopping them down on our heads when we were trying to get into the car

The Best Cake I Have Made in My Whole Entire Life: I have now retired from cake making. How can I improve upon perfection?

« Honeybees, Abolition, and the Homefront
It’s our turn for new roommates…. »

14 thoughts on “Ah, They’re a Bunch of Old Softies Really”