Philip Strange led the way, and others just followed in his wake, the latest the Autumn Watch crew.  Yes, Autumn Watch 2014 has jumped on the ivy bee bandwagon. Of course, they didn’t add much to Philip’s informative posts and photos. But, as much as it pains me to admit it, they did outdo Philip in one area: the mating footage. Apparently, the males are so gagging for the solitary female bees emerging from their little sand caves, that they are prone to pig-piling on top of her (a la frogs in a pond). In one scene, a ball of writhing bees tumbles down a dune cliff, oblivious apparently to the sudden change of locale. Unfortunately, you will have to catch up with Autumn Watch 2014 on the BBC iPlayer if you are in the UK, in your imagination if you are from anywhere else.

Did someone say ‘Autumn Watch’

You brave band of brothers and sisters who read this blog with any degree of regularity will know that any mention of a season with ‘watch’ at the end of it will instantly provoke a tirade from me, especially concerning gender bias and science. Yes, Autumn Watch 2014 did start last night, yes I did watch it (although we do watch it on recording to fast forward through the more rant-provoking parts). I am going to try my darndest not to rant. After all, I don’t have to watch it, do I? I don’t have to witness the near orgasmic obsession with the male animals whether they be ducks or rutting deer; the spurious mention of statistics and research without any context (‘controversial comorants’? I had to look that up), do I? There, I feel better for not having subjected you to that (they do have a rat cam this year, which is different from their usual/rutting deer/otter/starling murmuration ).

From rutting bees to eating bees

“It never saw us sitting here.” By Pierre Dalous on 28 May 2012. This file is licensed under the Creative Commons Attribution-Share Alike 3.0 Unported license. http://en.wikipedia.org/wiki/File:Pair_of_Merops_apiaster_feeding.jpg

Sorry, it’s not all rolling around in sand dunes for bees. It’s a rough world out there. And sometimes you clock it by means of a garden spider (also featured on Autumn Watch making a quick meal of a bee***). And sometimes you have a more colorful end, in this instance provided by Merops Apiaster. Ever heard of them? Nope, me neither.  According to the Guardian in an article published in September

Exotic bee-eaters have had their best ever breeding attempt in the UK with eight chicks fledging from two nests, conservationists said.

Two pairs of the brightly-coloured birds, which are normally found in the Mediterranean, have nested on the Isle of Wight this year.

At least they are both, male female, as colorful as each other. Will blow the minds of those presenters and camera people of a certain show that they cannot differentiate between the two. Maybe bee eaters are not such a bad thing after all.

Well, they got to eat too, you know.

Wasps, I mean. They are coming in for a lot of abuse on the British Beekeeping Facebook discussion page, including a disdain of their eating the young still hanging about the house this time of year (or so they were claiming on the BBKA page). Let it not be said we do not do our part to keep these wasps satisfied so they won’t go after honey bees and their own young. Caught this one wandering around my husband’s work bench and thought we would give it a bit of a sugar rush. Indeed, after slurping up the sugary solution, it did seem a bit wobbly on its feet… 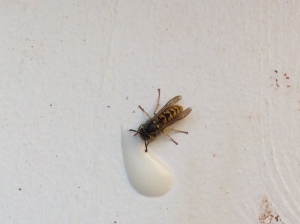 This is better than anything those pesky honeybees have 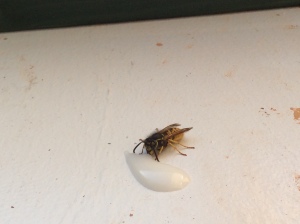 ***Speaking of garden spiders, the BBC has another nature show on offer tonight, The Spider House, with an actual scientist apparently cavorting about a house that has been purposely let to spiders (in other words a version of our house). Obviously the spider expert could not be left to do presenting duties on his own so he has been paired with Alice Roberts. Now I used to have a lot of time for Alice, particularly liked something she did about wild swimming a few years back. But I went off her when she practically had an orgasm on air at the sight of a male lion in another nature-ish program. It might be a coincidence that the male lion was actually engaged in mating activity with a female lion at the time. Never you fear. The camera person was able to narrow the focus enough so that she wouldn’t clutter the shot. Kind of reminds me of a program I was not going to rant about….