Yes that time again, the first fledges of the season. And, as per usual, we are overrun with babies and their frantic parents.

They are more work outside the nest than in

You will notice how the female blackbird runs to the edge of the oil tank (for that is the attractively decorated platform they are on) waiting for us to lob her more worms.Her chicks were our first clutch of fledges this spring, three plump speckled russet babies.

Who knew that at least one of these angelic chicks would lead a sit-in on one infamous day:

The day the worms ran out (bit of a lengthy one…)

The adult male blackbird is not the baby’s father. He is, however, a former baby from last summer who has regarded the conservatory as his ever since. He still has female markings-a speckled undercarriage and brown feathers in his wings-but because of his fearlessness in the face of the humans in the conservatory has become boss of the yard, chasing off every competitor.

We had his clutch of fledglings about a week later. They had at first hung out by the garage bees and the wood store. Now they very much own the place, even trying to muscle in on starling bathing time and almost succeeding. The starlings were momentarily flummoxed by the sight of a plump baby blackbird’s every expanding plumage  in water, but quickly prevailed remembering that they had the longer beeks.

A curiosity: the female’s clutch, from the first clip, were all mainly russet, whereas the boss boy’s were all predominantly speckled black. We at first thought it might be a genetic variation, but have since thought it might have something to do with gender.

At any rate, the adult blackbirds quickly abandon feeding the babies once they are mobile. It is a bit heart-tweeking to see a baby go cheeping after a parent who totally ignores it (in the first clip you can see the baby cheep after boss boy who isn’t its dad; after a certain point they will beg off anyone).

Before they got too worn out

You will be pleased to now turn you attention to more professional shots of our cast of characters, before they lost their looks to the caring of children, courtesy of our pal, Tony:

Boss Boy at his command post: you can see from his wing and undercarriage markings that he is a male still in his first year. He is the only blackbird ‘allowed’ in the conservatory…for now

Male blue tit: female is paler, and fledges smaller and paler still. They are just appearing around the yard. You hear them before you see them…

Forming an orderly queue outside the conservatory: they may look cuddly, but blue tits are ruthless around food. I have seen them scare off bigger birds, heading for them feet first.

I actually think there is no intention to be aggressive: they just don’t care what’s in their way.

I’m first in line! The great tits are the least afraid of us, standing at the door as we open it, rummaging around the conservatory while we are in it…

They will often pop into the kitchen, and wait patiently for an opportune time to leave once they have ascertained there is nothing of interest there. This is a male waiting for the door to open. The black line of feathers down the breast differentiates him from the female, whose feather line is narrower and sometimes broken.  They will wait patiently beside us while we are uncovering the worms, happy to make due with the odd one or two we throw them.

Most of the birds are bolder around us, getting physically close to us (although not as much as the Great Tit), when they are feeding their young. They are so desperate for food it often doesn’t matter what they have to do to get it.  Once mating and fledging is over, they become more reticent.  This is partly because they start to molt once mating season is over and they feel more vulnerable. But, I think also it’s because they don’t need us so much, and pretty much feed as and when, on their own terms. Even Boss boy, who is starting his molt into grown-up feathers (males will get white patches all over, sometimes sporting a dashing eyebrow here or a manly salt and pepper chest there) comes to the worm box less frequently, I think to confirm he still can and that the worms are still there.

People often say “I bet it wouldn’t take much to get them eating from your hand.”  Frankly, I am not interested in this. They are not circus animals, and I like to observe a respectful distance. They seem to be happy with this. Of course, I would love to be able to pat their little heads or scratch their plump bellies, but how do I know this would be good for them? (Geez, maybe I should get some candles and soft music….).

Back to Tony’s excellent photos: 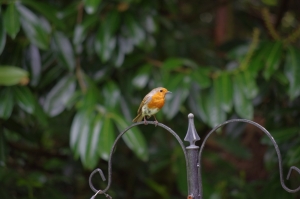 I’ll always have a soft spot for the robins… 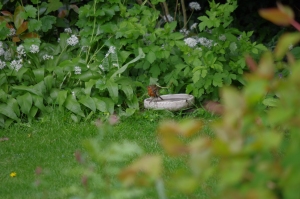 Even though, or maybe because they look like hell coming out of a bath.

And, even though the three that have trisected the garden constantly fight. We had a guy come over to collect a swarm last week (more about the bees in the next post) who had the misfortune of standing below a couple of them squabbling in our holly tree.  Kids, behave!

Strike a pose: although the male coloring is a striking study in contrasts-black and orange gold-I find the variations in the female coloring fascinating

These variations often help me to tell them apart, although I haven’t been very successful with it this season. Blackbirds are a curious case in the dominance stakes (not that kind, behave, or else you will be on the naughty step with the robins). Ostensibly, the males appear to dominate. But, if you watch them over a period of time, there are wide variations of behavior. Females will certainly dominate young males, but I have also seen them chase adult males off food, even engage in fisticuffs with them. A dominant male who has seen off another male one week will cede food to him the next as far as I can tell if the second male is feeding chicks and the dominant male is not.  The hierarchy is much more complex and fluid then we are often led to believe by nature programs….

Ah, who could resist one last family portrait

Of course, there are many more types of birds in our garden. But these number among our steady customers. They are the most common in a British garden. And we think we know all about them. But I learn something new about them, and from watching them, birds in general, every season. It is a mistake, I think, when nature shows focus on the rarest or most flamboyant, when there is so much to learn still from our most faithful friends.

By the by, I thought from all those nature programs, that the adults ate the dirty diapers? So, at first, I didn’t think anything of all those white tipped beaks. Until, I say a robin deposit what suspiciously looked like a dirty diaper onto one of the branches of a nearby tree, not once but a number of times. And then, a Great Tit did the same. What’s up with that, I says to my friend, Jo. And she goes, Well with all those fresh worms they get, they don’t need the stuff of undigested diapers. Always had a way with words, that Jo does.

Did someone mention nature programs?

SpringWatch.  And first out of the cod science blocks—sparrowhawks v. goshawks. Which is faster, can turn on a dime etc. The two contestants-a one-year old male sparrowhawk and a 12-year old female goshawk. Now, the goshawk is bigger anyway. So, it might have been a foregone conclusion that the sparrowhawk would have nudged out the goshawk.  But, am I the only one thinking that something was off from the get go regarding the matching up of birds in this contest?  One might like to look at the details about both birds to guess what I am on about (it has to do with size mainly) at this BBC site.

And, of course, there is more of the same misleading statements where that came from.  Really, the best thing about this show is the various webcams and being able to observe without any voice overs.

From the ‘yes, I do still have some friends’ department

Speaking of Jo, she made me this lovely-looking cake. But that was not the most special think about it. It was a Boston Cream (Pie) cake, virtually unheard of on UK shores, but part of the Massachusetts staple diet.  For more info, see here.

Let me eat cake: You are not the only ones who get cake, Emily and Emma!