Remember to notify your bees when you’re dead…..

Bees are regarded with respect,and the general custom of telling them of a death in the family of their owner is not yet extinct; it is believed in the Golden Valley that they would leave their hives if not told. There was a large apiary at the Moor, near Hay, and when the owner died, in 1873, no one told the bees. It was noticed shortly afterwards they all disappeared. In Weobley, it was thought they would die if not told, or that another death would follow the omission. I have heard of one case of which the bees in twelve hives died after the death, a loss attributed to neglect of the custom of announcing it to them.  There is at all times a fear of offending bees; they must not be bought or sold, or even given or received as a gift. “If any neighbour wants bees, I may give her a hive, and in course a present finds its way to me…” When bees swarm they are “tanged” with a clatter of frying pans and tin cans. Some say this is to make them settle, others that the practice gives the owner a right to follow the bees into his neighbour’s garden, or anywhere they may chance to be. Bees are lovers of peace, and will not stay with a quarrelsome family. A bee coming into the house is a sign of the coming of a stranger.

From The Folk-lore of Herefordshire by Ella Mary Leather.  1912

I have been reading through this book, on the recommendation of Phil Rickman,  who leans upon it quite heavily in his crime/mystery/supernatural Merrily Watkins series (she’s an Anglican vicar/exorcist–3-part series to start in the UK this evening. See preview here: https://www.youtube.com/watch?v=e6XxgjzvaQM). Bees feature quite prominently in folklore everywhere in the world and at any given point in history. What interested me about this quote was firstly how it echoed Roman law, which I had mentioned in a previous post. But what really caught my eye was how important it was for the bees to be notified of the keeper’s death. You wonder how these beliefs evolve–was it just a very practical reminder to relatives and friends that the bees will now need someone else ‘to keep’ them, so in notifying the bees everyone one else was on notice as well? A way of ensuring the continuation of the colonies?

Honey by any other name?

It’s that time of year again when beekeepers really need to care for their bees by means of bulking them up for the winter months. Yes, it’s sugar syrup time when the beekeepers have another opportunity to get sticky and the bees race around on a free sugar high. It’s a way of giving them a labor-free treat and, boy, do they appreciate it. The timing of the feeding is important: it should be done before winter sets in for the bees’ sake. But, it also needs to be done after the beekeeper extracts the last honey crop, especially if the honey is destined for commercial sale. I had never appreciated this particular aspect of timing until a recent exchange over at the Honey Bee Suite. But before that a very brief summary on bee feeding for the uninitiated.

There are a few ways of feeding bees, but unless you buy the sugar syrup already pre-mixed, you have to do some heating and stirring yourself, of sugar and water to the appropriate consistency so as to be easily processed by the bees. 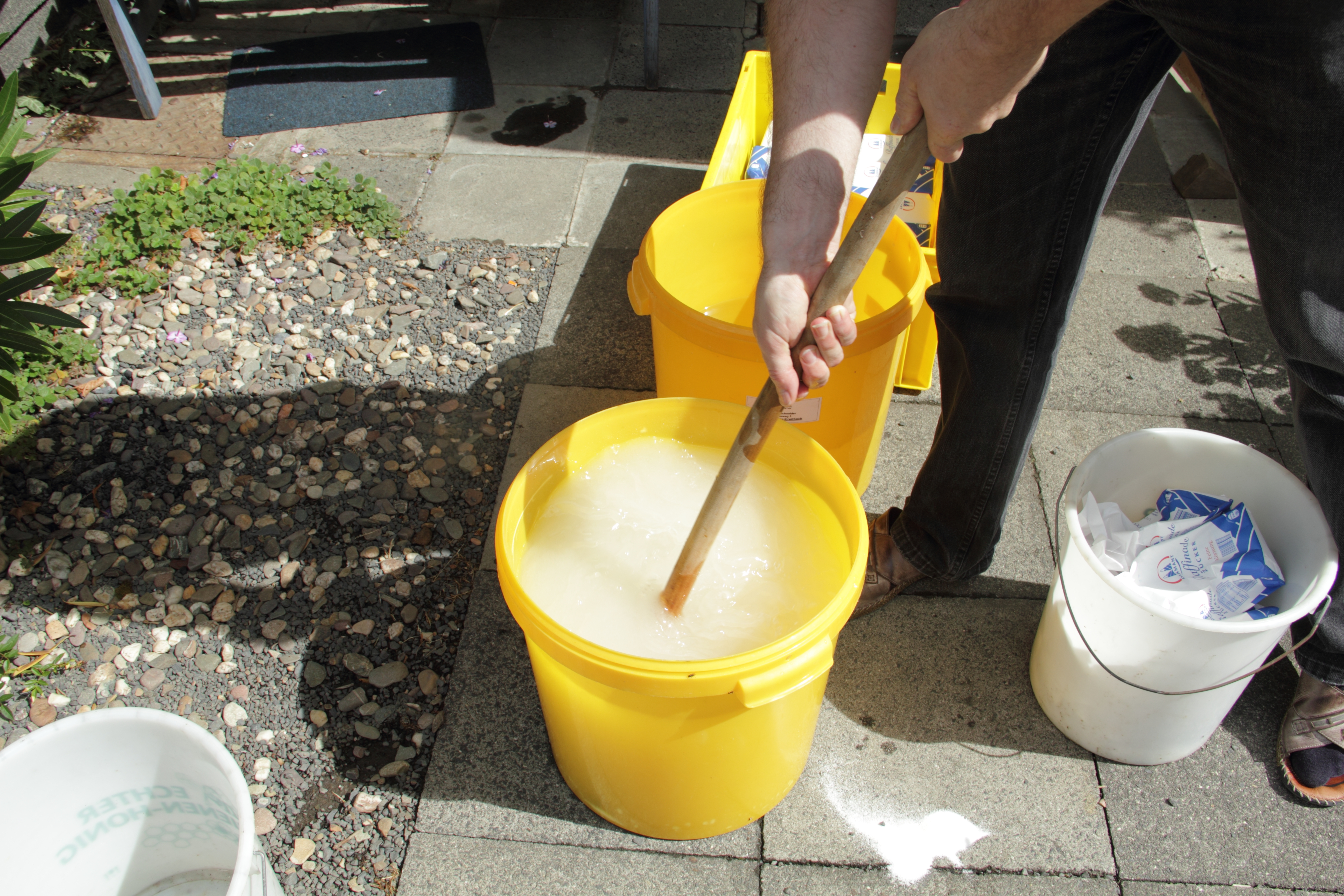 Mixing in a bucket By C.hahn (Own work) [CC BY-SA 3.0 (http://creativecommons.org/licenses/by-sa/3.0)%5D, via Wikimedia Commons

Usually, you can pour the mixture into a custom built feeder that fits onto the hive (see below) or into smaller buckets or tubs that can be placed into the hive. There are other methods as well, which involve jars etc fixed outside the hive.

Pouring a sugar syrup mixture into a custom feeder that fits onto the hive
By Kevin Pauba (Kevin Pauba) [CC BY 4.0 (http://creativecommons.org/licenses/by/4.0)%5D, via Wikimedia Commons

But what do the bees do with the sugar syrup? Most likely, bees will process it in the same way as they do nectar: if not to be ingested immediately then stored in comb for some future use.

However, if you have fed your bees with sugar syrup before final honey extraction, isn’t there a danger that what you sell in your jars is not honey in its purest sense? This consideration is the basis for a Honey Bee Suite post, Is your honey cut with sugar syrup?

We define honey as the product of bees processing nectar from flowers. So, honey cut with sugar syrup is not really honey, right?

However, the C4 plants maize (corn) and sugar cane do not have nectaries and are not known for producing honeydew. Sweet liquids pressed from the leaves, stems, or other herbaceous parts of a plant are not considered nectar for the purposes of honey, especially after they are refined by industry.

Well, Rusty got a bit of opposition on her definition of honey among other things:

We (as well as many beekeepers the world over) feed our bees sweetened water throughout the year, particularly during the early spring and autumn months, for the VERY simple reason that the BEES (not the beekeepers) need this sweetened water to LIVE.

The bees are well able to convert this PLANT sweetened water into HONEY, regardless the pedantic arguments, and the hive utilizes this honey throughout the winter months, to survive and live.

Honeycomb that we have harvested in fall (we have top bar, not Langstroth hives) shows all shades of color, from pale and almost water clear, to deep amber, almost brown. This is not due to the chemical make up of the honey, be it nectar or sugar produced. This is due to the aging of the bee product itself, and uncapped honey cells that contain a higher water content. Please stop over-thinking the color situation. Pure nectar honey would display the same thing.

I, along with [deleted], would love to see the chemical breakdown of the supposed “bee product,” in comparison with “nectar honey,” as I suspect little to no difference, beyond the aforementioned minerals and protein content.

Rusty held steadfast to her opinion on the definition of honey, but is there a right answer here?

All I can think of is how the bees would laugh as it’s just all food to them. The only thing that might make a difference to them is if their beekeeper were dead, and no one gave them their free sugar treats before winter…

25 thoughts on “Remember to notify your bees when you’re dead…..”