Tales from the Yard

I have pledged that I will stop apologizing for not posting more frequently, because at this rate I would be apologizing constantly. I don’t know whether I don’t post because of work, or because there is just so much going on in the yard that I become overwhelmed by all the subjects and procrastinate. The more I procrastinate, the more there is to post. And on and on.  So, here we go…

Boss has finished off raising his brood (s), recovered from his close encounter with a set of jaws, and losing the feathers on his head adopting the freaky halloween head blackbirds are prone to sporting at the end of summer.

However, it’s been more than a month since I have seen his mate, Toes, so I am a little concerned by that.

And I am a bit sad because we seemed to have lost our physically-challenged girl blackbird, her of the wonky leg.  She hadn’t been around for a month or so, and then she appeared out front one morning, flying over from a yard over to eat some worms.  But then Boss chased her off. And I haven’t seen her since.

I may not be seeing her because the boys have finally succeeded in hounding her out of the yard, or it could be because of the constant patrolling of

You will have seen the sparrowhawk having a snack in my last post. They continue to frequent the yard making kills or threatening to; mostly pigeons and doves are the victims. The birds, Boss included, are being quite careful, reluctant to be any distance from cover. So, maybe my girl decided it is best to stay away?

For the past few years families of great tits have been in constant residence in our yard, either in our nest boxes or in the trees surrounding us. During the summer, the parents shadow me when I move around the yard, are waiting for me in the morning, and will invade the conservatory looking for worms.

In August, past breeding season even for the stragglers, I found this little one, flopped on his belly with his wings spread at the bottom of the garden. When I threw the worms, he struggled to get them. It soon became apparent that his legs and little claws were not supporting him at all. He could fly, but he was totally paralyzed from his little birdy waist down. He stopped showing interest in worms and no wonder. Their method of eating a worm is to take them to the nearest branch and, fixing it between these claws, peck away at it bit by bit. This is in contrast to quite a few other songbirds, like robins, which just swallow the worms whole.

His interest did pick up when he say the suet pellets and allowed me to come right up to him in order to grab one from me. He then flew off into a shrub with it. And that was the last I saw of him. Or so I had thought.

Later, when I brought my work out into the yard to enjoy a bit of sun, I was surprised to find he had made his way all the way up to the house, outside the conservatory, which is where he is in the video. Essentially, he was determined to get to where the worms were, he knew where to find them, and he was would eat them, legs or no. And if that meant holding them down with the weight of his whole little body, then that was what he would do. Even if it was a bit tricky, as the worm would slide out from under his claw every time he tried to have a bite of it.

But he persisted and spent the rest of the day by my side going in and out of the tub where the worms were, which I kept next to my chair. And very slowly, his legs started to function. So, instead of crouching on a branch, he was able to stand. And instead of sitting on a worm to hold it down, he was able to grasp it with his claw and hold it firm. I stayed out as long as possible until he finally went off to roost.  The next morning, he was waiting outside the conservatory again and stuck close for the next few days until he was 100%.

How did he know where to go to get himself well? Well, he is the Dad from one of our nest boxes, one of my constant companions in June and July. And how did I know that? Firstly, the males have a wider black bar of feathers down their chests. Secondly, this Dad had a unique characteristic: one of his claws has only two toes, instead of three. He had the two front ones and somehow has lost the back one.

I know birds are prone to these kinds of illnesses, and from what I have seen they are usually fatal. I suppose he could have been momentarily trapped by something, or the jaws of something. All I know for sure is that Dad is made of pretty strong stuff. I’ve seen him around off and on.

The bees have not had as much attention as they should which is probably ok by them. But periodic checks have revealed two extremely busy colonies. In fact, they have been extra busy in the past week, especially with the warm weather. The garage bees seem to be quite enervated. I don’t think they have swarmed, but they are giving all the signs.

I haven’t given them their mite treatment this autumn. I’d like to see how it goes and may still opt to give them a winter treatment. I’ve skipped the treatment once in the past to no ill effect, so we’ll see.

It’s not like they are totally neglected. I have been putting leftover watermelon out to see what the wildlife would make of it. It was a big hit with the bees! They have, however, quite a bit of competition. The squirrels and the birds love the watermelon. And when they are finished, then other small creatures get a look in. Until the watermelon above turns into a shadow of its former self… 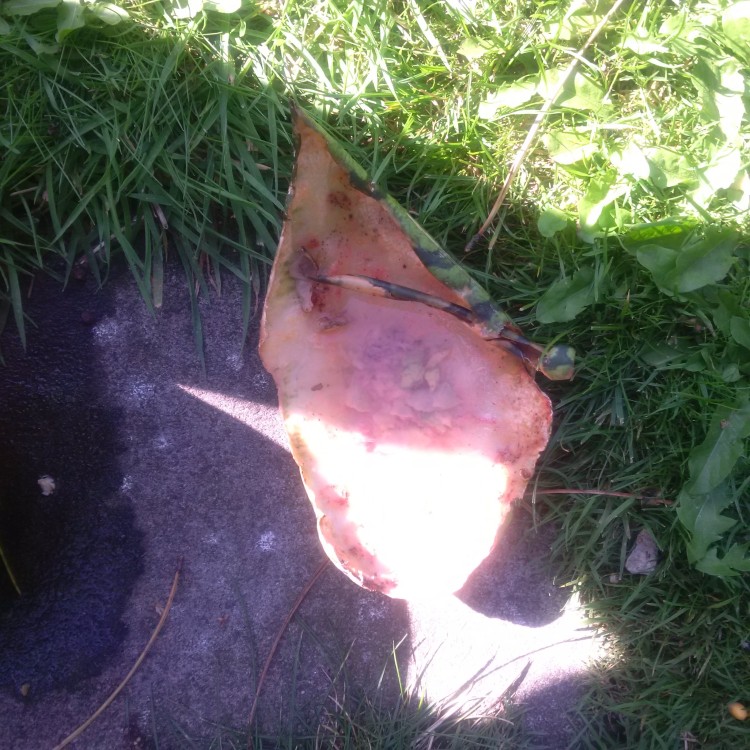 Speaking of other creatures, I discovered these one day, happily munching on this (unknown to me) foliage. Of course, this meant I have had to suspend my rigorous schedule of weeding (no laughing there at the back), especially the forest of nettles I have to one side of the yard, where a lovely bed of something colorful should be were I any kind of gardener. However, does this stage of the process mean they don’t need the nettles, or are the nettles for the next phase? And what will these become? Any answers greatly appreciated…

We have had quite a crew this summer, a lot of hog action as evidenced in past posts. We now have six feeding stations spread around the yard.  While there are still hogs about, we have had a few casualties unfortunately. A few weeks ago, we found a dead hog across the street on the verge. We can’t say whether or not it had been run over. It was a good size, but  when we turned it over, it had a large tumor or abscess. I did a bit of looking around about this kind of thing and it seems hedgehogs are particularly prone to abscesses which can be caused at times by quills sticking into them. Whether this is what killed this hedgehog or not, we do not know.  Just this past week, down the road a piece, we found another dead hedgehog by the side of the road. We have fields to the front, back and side of us, so they do have a wide open area to roam that is unfortunately bisected by a fairly busy road.

We haven’t heard the hedgehog we called Raspy. We always knew when it was in the yard because we could hear the rasping through the windows. It also seemed to be a bit of a bully with the other hedgehogs, pushing them off food. After consulting with our local hedgehog rescue, we thought it might have lung worm. We tried to catch it, but were not successful. And now we haven’t heard the rasping for weeks. It is possible that the one with the abscess was Raspy, but there’s no way of knowing for sure…

I have a squirrel gal pal who has her own tub of sunflower seeds in the conservatory, who will come running if I shake a bag of brazil or hazel nuts at her, and who is probably the only squirrel who has a lovely mattress made out of said nuts.  I don’t have any of my usual bad pics of her yet. Just tried to get one by trying to lure her with a little container of nuts. But she’s too used to me now: she runs right past me, grasps the container in her mouth, and then legs it, nuts flying out around her.

Doh! Outsmarted by a squirrel. Not difficult.

« Caught on camera
And just in time for Halloween… »

5 thoughts on “Tales from the Yard”