It’s around this time of year, freezing cold, nothing on the ground, that the animals having either numbers or muscle on their side dominate whatever food is thrown out.

Pigeons constitute one such animal. It is not unusual to have a lawn carpeted in pigeons, hogging all the seed.  I was told at the shop where we buy all our wildlife food that even the most vociferous ‘nature lovers’ or ‘bird lovers’ have expressed murderous impulses when confronted with a pigeon.

Have you ever seen a pigeon flying?  They may look as big as Buicks on the ground, but in the air they are fleet, and dare I say it? Graceful.  Often, driving along in a car, I will see a bird soar up in the air in front of me, only to immediately descend in the most elegant swan dive I have ever seen. Which bird? The pigeon! You would have thought a belly flop more likely. I did, and had to observe it keenly before I would admit it was indeed a pigeon.

Not to mention that it is usually a pigeon (or a dove) who will take one for the team when the sparrow hawk is on one of its shopping expeditions in my yard.

And, if none of that convinces you, maybe this from Lesley the Bird Nerd will:

Of course, many in the UK and most likely other parts of the world think this creature the enemy: 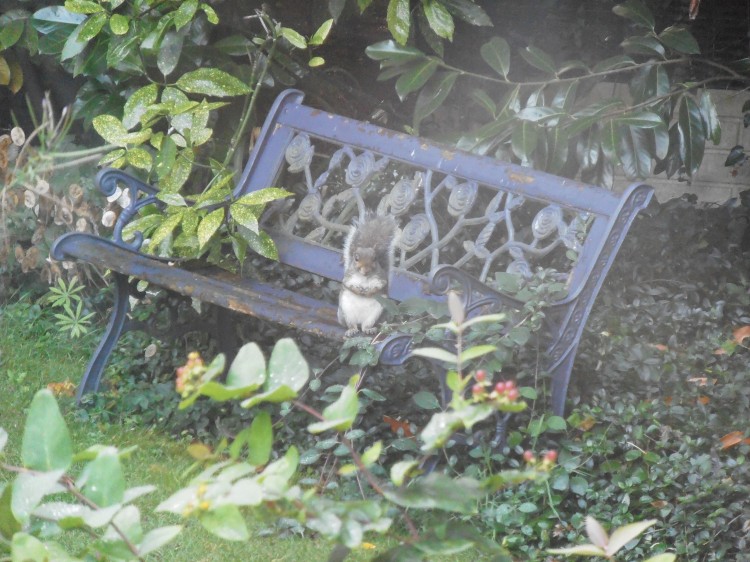 I was just sitting here, minding my own business! I had nothing to do with that bird feeder you just filled an hour ago now empty on the ground….

This is not my little gal pal, Dibble, no she’s a bit chubbier.  While it is true that she and her colleagues will also hoover up bird seed on the ground and in feeders, they are also responsible for a bit of forestry, courtesy of their excellent caching skills. I will remain convinced that they have not directly caused the fall in red squirrel numbers: People started the decline of the red squirrel by hunting them, and just about finished them off by destroying the type of habitat they flourish in. It is not the grey squirrel’s fault that it can survive in almost any kind of habitat on the ground and in trees.

They are determined and that is what often puts them at loggerheads with us. When we were last in the States, we set up one of those ground feeding cages for little birds in my mother’s yard, one that is supposed to keep out both larger birds and squirrels. True, the openings in the cage were too small for the squirrels. But the day we set it up we noticed that one squirrel assiduously guarded it, chasing off all incomers, bird and squirrel alike. During the quiet time when no assault was being launched, the squirrel circled the cage, trying to stick its face through the openings. When that didn’t work, it reached its little furry arms in to grab as much seed as it could reach. When all the seed within range had been eaten, it continued to pace around the cage, digging a bit here and there. Once it had grown dark, it had to give up for the night. But it was back in the morning. We had to return to the UK on that day, and so left my mother with strict instructions to watch it. Well, after another day, its persistence paid off: it had managed to tunnel its way in, gaining a bodyguard at the same time. We don’t know if it shared the loot with its lookout. But suffice to say, my mother is going to have to rethink the cage

But they are so darned entertaining. Who can resist Pepito the squirrel?

One story I was told by a farmer had to do with a crow picking an eye out of a dead lamb, a bit of sentimentality on display in this image…. (Attribution: By Internet Archive Book Images [No restrictions], via Wikimedia Commons https://commons.wikimedia.org/wiki/File%3AAugust_Schenck_-_Agony.jpg)

While we were at my mother’s, we had the opportunity to make the acquaintance of a family of crows that frequent her yard.  Her neighbors are dead set against crows, and it does seem like a significant number of people are. That is especially true of farmers around these parts. In fact there is still a cruel practice of entrapping a crow cousin, equally detested, a magpie in a box or cage, and leaving it out to discourage other birds. They are used as bait birds.

I have seen crows descend on fields, so I know in mobs as with any animal (humans as well, come to think of it) they can be annoying, even destructive. But crows in a back yard? As with the squirrels, there are ways of training their habits. We started trying to challenge them with food positions and containers, but didn’t stay long enough to witness much. We did, however, train them enough to land on the railings on my mother’s porch and looking into the window. Not sure if she or her partner was best pleased!