And We Have Lift Off!

Move over Mark Twain, it’s a bumble on the move!

I am a bit behind on posts because we have been entertaining my brother and niece, over from the States for the past few weeks.  It’s been a whirlwind of touring, although not as far-flung as my friend in the photo above.

Here is a bit of what was going on as of the end of June before their visit.  Note:  no bee report here.  I had to leave them to get on with it, whatever it is.  If one where to go strictly by activity outside the hive, they look as if it is business as usual, nothing wrong with us, what would ever make you think that?  We hope to get a closer look this week if it ever stops raining. 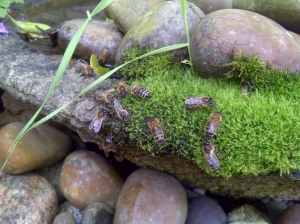 Drinking their cares away while someone else does all the worrying….

Fly Like the Wind, or At Least Flappy BreezeThe Great Twitlets have fledged!  The adults had been back and forth with the worms during the first half of the morning.  But as I worked outside, trying to catch a little sun, I had this sensation of being watched.  A few times I would look up at the nest box to see if the adults were there, but nothing.  Just when I thought I was imagining things, I looked up to see a little face peering out of the nest box.  Then it disappeared, only to re-appear a few seconds later.  I was sure this was not the face of Ralph or Alice, as they are pretty business-like around the nest, no lolligagging around taking in the view.

Sure enough, in quick succession three popped out, first into the adjacent tree above the hive, then hopping into the cherry tree, and then into a laurel deeper into the wood.  However, it wasn’t over.  Another little face kept peeping out.  At first I thought this might be similar to a Springwatch moment, when one little chick was left alone in the nest to die.  But, no, this one soon made its way directly into the pine tree, where I could have a good look at it–perfectly formed with a bit of an up-do.  It soon moved off in the direction of its siblings.

The story doesn’t end there, as the adults are still, infrequently, bringing worms to the nest box.  I hope the little straggler makes it….

A face only a mother could love (from Wikimedia)

The few days after the fledging the weather has been particularly bad, with heavy downpours and wind.  We took encouragement from the big mouthfuls of worms the parents have been taking that the little fledgies are still going strong.

Fuzzio, apparently, is still tending to fledglings.  While he is around the worms, I hear little peeps in the tree by the garage.  In due course, he flies in that direction with a mouthful of worms.  The peeping picks up pace, and then subsides for a bit.  I might have even caught sight of one or two hopping around him in the tree.  Mrs Fuzz has been noticeable by her abscence into the early afternoon, and has only just made an appearance.  Perhaps she is on the lookout for a new nest site for the next little chicks?

Fuzzio may be feeding Mrs Fuzz again.  With this weather he has been sporting his Phantom of the Opera look (but without the mask), actually causing me to start a few times as he has plonked himself down looking directly at me.

Three dunnocks, one really fat on the scene.  I was a little slow on the uptake:  I think this is a chick!

Day four and no sight of Bunnio.  I hope it is in search of some companions and hasn’t been snatched by the neighborhood fox….

« FEED ME!
‘And the nightjars flying with the ricks’ »