In which the beekeeper describes the first official inspection, or what can be described as a game of two halves, er I think, to quote from some sport I never watch.

Beginner beekeepers may 1) want to look away, or 2) look on these problems (some self-induced by negligent beekeeping) and learn….

So we are a bit captive in the house right now after the first bee inspection. After the false swarm of Wednesday which was the bee reminder that we were a little behind on the job, we were determined despite weather forecasts to get into the hives and have an official inspection. Concerns were two-fold:

Garage bees or our indecisive swarmers: was there anything to be done with them at this point? We had gone to brood and a half, but there was only one super and without a full complement of frames. As the queen was barely a year old and not marked we didn’t have a lot of options in March for intervening to prevent a swarm. One could only imagine what conditions were like in there;  they were probably packed to the rafters.

Main hive or the backdoor bees (see this post), who we tried to ‘re- orient’ back in March. Traffic around the hive has remained relatively light, although there had been pollen collection. I was more concerned about them than I was of the swarmers who I at least could be reasonably sure were in good health.

It was with some trepidation that we made our way down to main hive first.

Size of colony: opening the hive confirmed my impression about the quantity of bees. If there were 20,000 I would be surprised. However, they seemed in lively spirits and at no obvious mite risk – I could not detect any evidence of varroa-no obvious mites on the bees, no chewed wings etc.

The queen for this hive as with the garage hive is not yet a year old. However, when we had to change the floor and get them to use the main entrance, I did have concerns about the fate of the queen (also unmarked)-did she fall out of the hive or end up on the wrong side of the queen excluder? The light traffic seemed to confirm that maybe they had had to slow down due to queen replacement (ruling out any other type of illness). 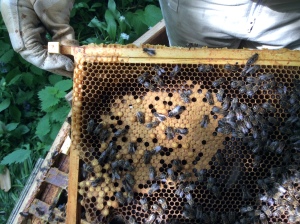 Main Hive: Well, there is brood in various stages, but not a heck of a lot

Frame inspection: I think my concerns about the queen were somewhat confirmed in that there were only about three frames of brood. However, there was not an over-abundance of drones, in fact we saw hardly any. This would have suggested a certain period of queenlessness to me. There were drone cells, but not too many as to cause concern. There were no queen cells, maybe a few cups. So either the queen was replaced or superseded, or there is something not quite right with the queen?  We will have to keep our eye on them the next couple of weeks.

Main Hive: more of the same

There were a few other causes for concern: evidence of wax moth, and maybe chalk brood. There seemed to be one or two uncapped cells of brood, but my husband thinks we may have done that trying to remove frames. And, the brood were not dead or dried, so maybe he is right.

Stores were ok, nector and/or honey on most frames, but not impressive.  Of course, they wouldn’t be with is size of  a colony.

All in all, still a bit concerned (Nosema? Starvation? Chalk Brood? Poorly Queen? New Queen?).  We will wait a bit and see what the bees tell us.

Garage Hive: You hardly ever get someone complaining about too much space

Boy oh boy was this the diametrical opposite!  We had to fight our way in as there was already a lot of activity around the hive. There was no evidence that they have successfully swarmed since Wednesday, as the hive was stuffed. More than twice the size of the other hive easily. In fine, active fettle, with no obvious mite evidence and no preponderance of drones.

Yet again we witnessed the consequences of not enough frames in the super as evidence in the photo above (when will we learn? As this construction was full of honey, as there were many bees flying about in the hive, as they are probably in a state of swarm alert, we decided to let this structure be for now (although we both had the same thought: once things calm down, might this be our first opportunity to sample some of their honey?).

In fact, we only made a cursory inspection of frames in the brood box because of this swarm readiness. Essentially the cow is almost out of the barn at this point. In terms of direct intervention, it’s a bit late, especially with an unmarked queen.  Brood and a half doesn’t seem to have given them the extra space they needed. We saw a good brood pattern and no queen cells on the frames we looked at, but there could be caps/cups on the frames we missed out. 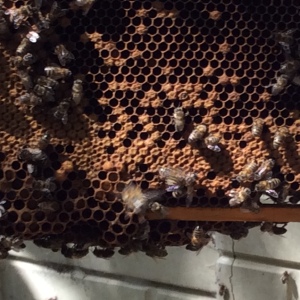 Garage Bees: No obvious problems, but we only managed to look at a few frames

We did add another super and used all the new frames we had (still need more) to give them more room. We also put a nuc on top of the wood store near the hive to see if we could attract the swarm we feel is coming…

To be honest, I am a bit surprised at their exponential growth as the weather this March had not been as encouraging in years past, and April has been on the chilly, rainy side with some warm days granted. It’s interesting (and frustrating) that two hives in the same garden could produce such different results.

Let’s end on a positive note

Last post it was Lola’s cupcakes. However, even though we were in London again this week and brought home four, they disappeared before a photo could be taken.

So, I bring you an artichoke moment instead 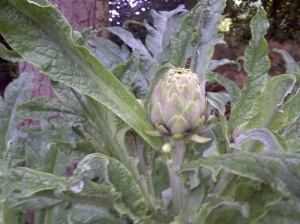