No, this isn’t some kind of weird ornament or Victorian curio. And, yes, it is alive. And oh so compliant because it knows we are its only hope at this point. God only knows how long it had been stuck in this fat ball feeder, surrounded by a circular cage to keep out, ahem, larger birds and squirrels.

But try telling that to a pubescent starling, of the firm belief that anything edible is fair game and within reach if you are determined enough. I say pubescent, because as you have seen from posts past, as youngsters they are of a kind of subdued grey color. Their one defining feature is a resemblance to common depictions of aliens– 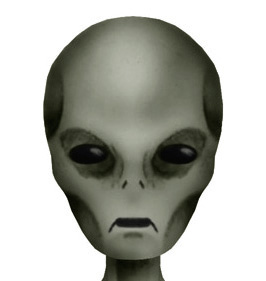 It’s the eyes…. (from Wikimedia Commons: Drawing of a Green Alien head. Illustration made by user LeCire for its use on Wikipedia, technique of pencil with digital painting. https://commons.wikimedia.org/wiki/File:Alien_head.jpg)

Which you can see even from the awkward positioning of the first photo. However, by the age this little one has achieved, the dark, iridescent feathers of the adult are already starting to fill in. Probably not so obvious from this photo.

As mentioned before, it was compliant as we tried to extract it using the ‘pliers of life’. Uncharacteristically  compliant, as a more argumentative bird you will not find. The number of times a pleasant, peaceful summer’s day will be disturbed by arguments at the feeders, around the food on the ground, well you lose count after a while. They argue in an almost human ‘I have to have the last word’ manner:  two will squabble over food, the loser sulking off, the winner tucking into the food, only for the winner to follow the loser to shout into its face again and then stomp back to the food.

Anyway, no such ructions while we were handling it, trying to extract wing, head, leg, foot. Finally, with the help of the pliers of life, we were able to set it fee:

This came about because all our feeders have taken such a battering, this particular one having lost its top (to attempted squirrel incursion when it was suspended from the pole with which it was sold). We have seen blackbirds pecking at the fat balls from the top opening when it is fully loaded, squirrels squeezing their bodies into the tube to reach the fat balls etc. We had not seen any bird try to wedge itself down, and so thought it was relatively safe. We had not reckoned on the determination of starlings…

Of course, not everyone escapes unscathed

I came out one morning to carnage beneath the clothesline: a pile of feathers, two wings and a tail flung about. I had noted a collared dove that I suspected might be poorly at various places around the yard. No matter how close I approached it did not run away. I even mowed the lawn in close proximity to it; it did not move a muscle.

I suspect the dove was the victim, but who the culprit? My usual observation of cat kills has been that there will be a lot of feathers but no body, cats (and foxes) preferring to cart their victims off to the nearest hedge or group of bushes to enjoy their prize in private. Our suspicion is the resident escapee eagle, or perhaps one of the wild sparrowhawks. I had a photo, but can’t remember which device it is on (a 21st century problem!). Perhaps not a sight for more delicate readers at any rate.

Yes, Summer can be a cruel season

And as it comes to an end, some creatures can become not so choosy about their sustenance (I would also say desperate, given the starling at the beginning of this post. But that wasn’t desperation, that was starlings being pure bloody-minded as usual):

These very sweet Polish cookies were intended for the birds (magpies love dunking them), but this wasp quickly laid claim.

Wait, it gets better or scarier depending on your view of things waspish:

This may be totally fanciful, but I think it is the same wasp. And I think now that it has eaten the harder, sugared surface, it has now gone onto sugary sources new. What gives me that idea?

Not honey, but not bad…

These pieces of dried fruit captured its interest, especially the cranberries which are a bit plumper. It set to work this morning, and has worked determinedly at it for most of the day:

Moral of the story: instead of all those wasp catchers that kill the little buggers, why not strew a few cookies and pieces of dried fruit around your hives, conservatory, lawn chairs? Then everyone is happy!**

So many other things to write about

I still have not written about the collared dove and magpie wars, Bossy our blackbird pal and his Bossy girl setting up house near our mailbox. And the little bats flying around our heads at dusk the other night.*** There are too many stories in one humble English garden!

And beautiful things to look at. What the heck are these and did I plant them?

And the bees. They are doing well, no real cause for concern. Next week, we will move our nuc dwellers into their own hive. They are extremely busy and getting a bit tetchy when I mow the lawn. Usually a sign summer is coming to an end.

But can’t afford to become too complacent, because this notice is making the rounds:

THIS IS AN AUTOMATED EMAIL. PLEASE DO NOT REPLY.

In many areas of the UK nectar flows have ceased and reports are coming in from Regional and Seasonal Bee Inspectors of starving bee colonies, where the beekeeper is not aware that the bees are severely short of food, or the colony(s) have already starved to death. It is also apparent that Wasps are becoming populous in many areas and they too are desperate for nutrition so Beekeepers should be mindful of the need to protect colonies from Wasp invasion particularly where feeding is taking place in the apiary.

Immediate action:
• Firstly – Check all colonies feed levels by ‘hefting the hive’ – Check the weight of the colony by lifting below the floor on both sides of the hive to see how much it weighs (Photograph attached – Hefting a Hive). Where the hive is light, liquid feed should be applied directly above the bees. Remove any supers from above the brood box which are empty or have few bees in them. This will help the bees get to the food quickly.
• Feed can be sugar and water mixed at 2:1 ratio or one of the proprietary ready mixed syrups available from Beekeeping Equipment Suppliers.
• Fondant can be used in an emergency if nothing else is available – but liquid feed will be more appropriate at this time of the season.
• Large starving colonies of bees will take 1 gallon (Approx 5 Litres) of syrup very quickly – smaller colonies ½ gallon (Approx 2.5 Litres) may be sufficient to keep them going, but after feeding heft hives again and check the weight – if in doubt feed some more in a few days time.

That’s me told then.

*All photos (except one from Wikimedia Commons) taken with my very old, unfashionable phone. View at own risk.

**By the end of the day, the first cranberry had totally disappeared, as well as the raisin.  The next morning, as I write it has started on the second cranberry. It’s got to be the same wasp….

***There is a thing here now, bamping I think it is or bat champing, where people camp out in old churches to watch the bats in the belfries, I presume. See http://www.visitchurches.org.uk/latestnews/2015-07-22/Bat-Champingbat-watching-event-in-Cambridgeshire/